Vienna, Austria—Former Western Balkan heads of state, high-level officials and Balkans experts were the panelists at a one-day conference at the Diplomatic Academy of Vienna - Vienna School of International Studies. The Balkan Leadership Conference of November 11, 2022, titled "Western Balkan Countries and EU Relations – Challenges and Perspectives,” was held jointly by the Europe-Middle East branch of UPF and the Podgorica Club of former heads of state of the Balkan Peninsula.

The approximately 150 participants included representatives from 17 embassies, scholars, and NGO representatives. This event followed two UPF conferences on Western Balkan peace and security held in April and June of this year, co-sponsored by the Podgorica Club and the government of Kosovo, respectively.

In the context of the war in Ukraine and its impact on Western Balkan peace and security, respected statesmen from the region, as well as Austrian politicians and diplomats, offered their perspectives on the state of relations between the Western Balkans and the European Union. 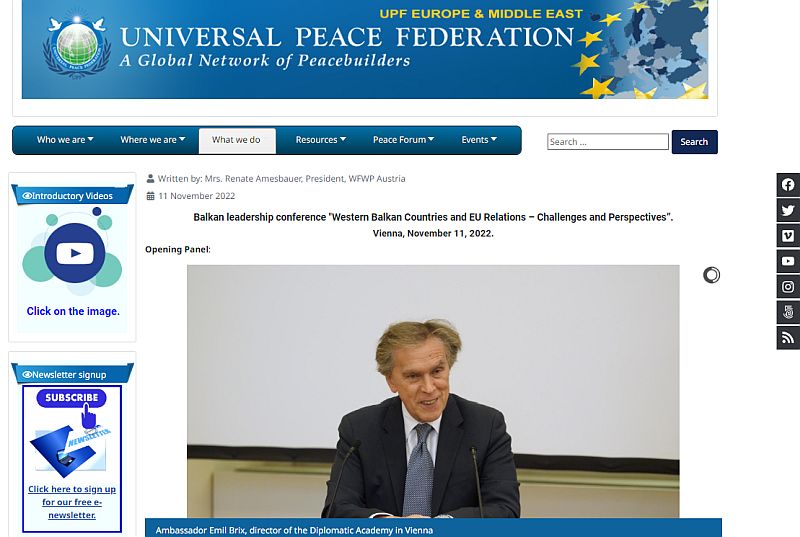 Ambassador Emil Brix, director of the Diplomatic Academy in Vienna, stated that as a result of the Ukraine war, we now tend to speak more urgently about the European security architecture and about making sure that the Western Balkans do not become front states in an ideological war between good and evil. Ambassador Brix thanked the participants for coming to the Diplomatic Academy in Vienna. He praised the Podgorica Club for taking ownership of the situation in the region, and assured them of his continued support.

In recorded welcoming remarks, Dr. Wolfgang Petritsch, the president of the Austrian Institute for International Affairs, described the new situation that has arisen in Europe as a result of the Ukraine war and all the ripple effects in the region and beyond. He suggested that the Western Balkan nations should be included first in an accelerated process of accession to the European Union and encouraged all states that are already members of the EU to use their expertise and contribute to this process wisely. He concluded by saying that this conference in Vienna was taking place at the right time.

Dr. Katsumi Otsuka, Chair UPF Europe and Middle East, greeted everyone on behalf of UPF and expressed his gratitude that the conference could be held at such a distinguished place in Vienna. “The hope of all ages has been to experience peace and prosperity”, he said. However, especially during the past 25 years we have experienced how difficult it is to realize this. The Ukrainian war in particular has shown us that there is still a long way to go.

Western Balkans and the EU Accession Process Fatigue – Results, Responsibilities and Next Steps

Dr. Valentin Inzko, the high representative for Bosnia-Herzegovina (2009-2021) in a video message

Hon. Lukas Mandl, a member of the European Parliament from Austria

Dr. Michael Balcomb, a senior advisor to UPF for Europe and the Middle East

Youth, Peace and Security in Western Balkans – Moving Forward with the Energy and Optimism of the Next Generation

Slobodan Martinović, advisor to the former president of Montenegr

Aleksandar Savović, the chief of cabinet of former President Mladen Ivanić of Bosnia-Herzegovina

Lirjetë Avdiu-Vejsa, the chairwoman of the K Cultural Association, Vienna

Kirsty Rancier from Canada, the youth focal point for the United Nations Office on Drugs and Crime

Bogdan Pammer from Austria, the president of IAYSP for Europe and the Middle East

Luka Čekić, an expert on the Western Balkans at the International Institute for Peace